Forums
PRESENTATION OF THE AREA OF MANAGEMENT AGENCY WATER MOUHOUN

The Water Agency Mouhoun is an integral part of the five (5) Water Agencies created in the country between 2007 and 2011. The agreement was signed on January 20, 2010. Space covering partially or fully six (6 ) administrative regions (see map areas covered by MEAs) (the Mouhoun, Cascades, the West Centre, Hauts-Bassins, North and Southwest), twenty (20) provinces including 183 communes, the Water Agency Mouhoun is the body authorizing the activities of its jurisdiction. This is a Public Interest Group (GIP) created between the state and local governments and whose area of ​​jurisdiction the watershed Mouhoun and Banifing under the basin.

As main features on space, we can note the following: 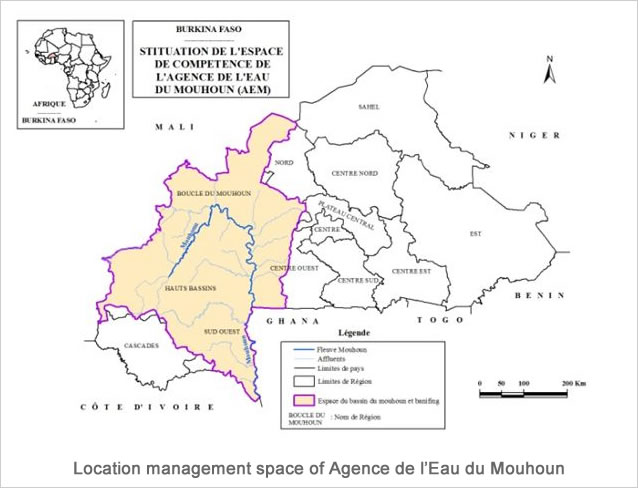 The headquarters of the Water Agency Mouhoun is located Dédougou, capital of the Region of Mouhoun. He is currently in the former premises of PNGT I (National Program for Management of Terroirs-Phase I); located on the main road Dedougou-Nouna, just after the Burkinabe National Electricity Company (SONABEL).
The bodies and the Management and Administration of the Water Agency Mouhoun are: